We are really looking forward to this weekend’s Tribe Ancoats launch and gourmet BBQ, hosted by this man…Robert Owen Brown.

If his cookery book’s name is anything to go by – Crispy Squirrel & Vimto Trifle – we’re in for a treat! 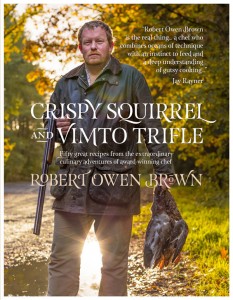 Honest. Regional. Seasonal. Fresh. Robert Owen Brown is a down to earth chef who believes that food is for eating.  He buys his ingredients from the kind of people who will recognise his voice on the end of the phone.  Who will leave the golf course at three in the afternoon to fulfil an order for 10lb of tripe and who get equally excited about the greatest cuts of meat as the squidgiest bits of offal.

He cooks seasonal, local ingredients.  You won’t see strawberries in December or exotic fish on his menus.  He uses rapeseed oil rather than olive because it’s British and sustainable, as well as being delicious and better to fry with.  There’s lard in his pastry and suet in his puddings.  He is famous as much for the stunning quality of his food as his attitude to it (he once put petit pois on a menu as little peas because that’s what they are).

This website uses cookies to improve your experience. We'll assume you're ok with this, but you can opt-out if you wish.Accept